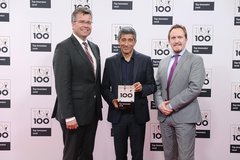 Masterflex Group is one of the TOP 100

Gelsenkirchen – The TOP 100 most innovative German SMEs have been recognised for the 23rd time. This year, the Masterflex Group is included in the innovative elite. The globally active company, based in Gelsenkirchen in Germany’s industrial Ruhr region heartland, had previously undergone a demanding and scientific selection process that examined its innovation management and innovation success. The mentor of the innovation competition, Ranga Yogeshwar, a famous science writer and TV presenter, will honour the top innovators at the German SME Summit in Essen on 24 June.

The Masterflex Group, now awarded the prestigious TOP 100 accolade, depends on "good connections" in a very literal sense: The Gelsenkirchen-based company manufactures high-tech hoses using high-end plastics for almost all known industries, from mechanical engineering and the aviation and automotive industries through to the food and pharmaceuticals sectors. This requires the permanent development of materials with new properties. Ideas come from the in-house sales and technical development teams, but also from suppliers and research institutes. Formed in 1987, the company has more than 600 employees around the world.

"The technical market tends to be quite dry and factual. That’s why we’re always looking to take a chance and stand out from the crowd," says Andreas Bastin, CEO of the publicly listed hose manufacturer. This is where the TOP 100 company’s Marketing team comes to the fore. One example: Because the technicians described a new product as "their baby", the Marketing department developed a campaign featuring newborns – including a direct mail in the form of a thank-you card like those sent after the birth of a child.

The Masterflex Group has been familiar to industry experts for some time. It is the market leader in Germany and one of the leading international companies in its area of expertise. The top innovator is also represented with dedicated locations in the rest of Europe, as well as in the USA, Brazil, China and Singapore.

More than 4,000 companies expressed an interest in this year's TOP 100, with 366 of them applying for the qualification round. 284 reached the final round, with 238 ultimately making it into the TOP 100 (a maximum of 100 in each of the three size categories). The companies were again assessed by Prof. Nikolaus Franke and his team from the Institute for Entrepreneurship and Innovation at Vienna University of Economics and Business. They investigated more than 100 parameters in five evaluation categories: "Innovation-friendly senior management", "Innovation climate", "Innovative processes and organisation", "Innovation marketing/external orientation" and "Innovation success".

The TOP 100 are the pacesetters in their industries. This is proven by the findings of the evaluation: The companies include 97 national market leaders and 32 global market leaders, to which the Masterflex Group also belongs. On average, their most recent figures show that they generated 40 percent of their revenue from market innovations and product improvements, which they brought to the market before their competitors. Their revenue growth was 28 percentage points above the respective industry average. All in all, the SMEs submitted 2,292 national and international patents over the past three years. This innovative strength is also reflected in job numbers: The TOP 100 are planning to recruit around 9,500 new employees in the next three years.

The mentor of the TOP 100, science writer and TV presenter Ranga Yogeshwar, is impressed by the quality of the companies and hopes that they will send out a signal: "The way in which the TOP 100 generate new ideas and develop them into pioneering products and services is truly remarkable, and I am delighted that the award makes these qualities visible. Hopefully, their success will encourage other companies to follow their lead, because this culture of innovation will be increasingly important for all companies in future."

Since 1993, compamedia has awarded the TOP 100 accolade to SMEs demonstrating particular innovative strength and above-average innovative success. Scientific direction has been in the hands of Prof. Nikolaus Franke from the Institute for Entrepreneurship and Innovation at Vienna University of Economics and Business since 2002. The mentor of TOP 100 is the science writer and TV presenter Ranga Yogeshwar. The project partners are the Fraunhofer Society and the German Association for Small and Medium-sized Businesses (BVMW). manager magazin supports the peer group comparison as a media partner. Further information can be found at www.top100.de.

<- Back to: Latest News
© Masterflex Group. All rights reserved.